Don’t be misled. At the heart of the Motherhood debate is not whether “stay-at-home” mothers “work for a living”. That is the Make-Believe media and Democrat deflection. No, at the heart of this debate is the Democrat theme to nullify the opinions of “stay-at-home” mothers on the economy, to reduce stay-at-home mothers to second-class citizenship. That was the specific point of Hilary Rosen's assault last week - that Ann Romney is unqualified to speak to the economy because she raised her children at home. To women, especially suburban women, Obama and Rosen are saying: “Stay at home, moms.” 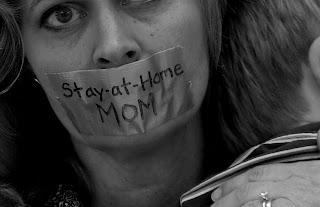 The motherhood controversy is part of the ongoing Obama strategy making “women’s issues” a foundation of his re-election campaign. Doing so serves two purposes. First, it distracts from the dismal economy. Second, it presumably motivates an important voting base - overall 56% of women voted for Obama in 2008 (The marriage gap was vast: Unmarried women preferred Obama by 70% while 50% of married women preferred McCain).

But this strategy is risky. Obama presides over more Americans living in poverty than anytime in U.S. history, and the majority of those poor are women. Emphasizing poverty and the economy as a women’s issue would be political suicide. This explains why Obama instead shills the distraction and deception of casting the GOP as the bogeyman attacking women, forcing them to become pregnant and chaining them to their kitchen stoves.

Thus when objections arose to Obama’s tyrannical bullying of religious groups, Obama and the Media promptly demagogued the issue by positing Republicans as oppressors seeking to deprive women of birth control. Obama cannot win the religious rights argument but he might win by cynically and deceitfully casting the issue as a reproductive rights argument.

Now enter the Motherhood controversy. Obama launched the issue last weekend claiming that he and Michelle didn’t have the “luxury” of having Michelle stay at home to raise Sasha and Malia (never mind that Michelle’s “work” consisted of collecting a $316K salary in 2005 doing "community affairs" for a university hospital that was earmarked by her then senator-hubby to receive a cool $1M in taxpayer money). The real message behind Obama’s remark is that mothers who raise their children at home do so as a “luxury”. Setting aside the snide arrogance and contempt behind the statement, what it did was set up Hilary Rosen’s comment a few days later that Ann Romney’s role as a stay-at-home mother disqualified her from speaking on any real world issues, including economics, since she hasn’t been outside her kitchen walls earning a living.

The Make-Believe Media, as well as Obama, subsequently appeared to “disavow” Rosen’s statements, but only to the extent of affirming the “value” of stay-at-home mothers. Critically, none of these disavowals addressed Rosen’s foundational point that such mothers do not get to voice an opinion about any important economic issues; that they may be seen, but not heard. Some Democrats candidly admit that stay-at-home mothers obviously understand economics and its impact on daily life, for example, knowing the price of gas, bread and eggs "better than their husbands". And that is the danger posed by voices like Ann Romeny - they realize all too well that Obama's contrived "war of women" is a cynical detraction from the miserable plight of women under the Obama Economy.