Boos greeted the post-Rose Parade Occupy protestors on Monday, January 2nd. Boos and empty bleachers. Traditionally, when the last float, band and equestrian unit in the Rose Parade passes and the parade concludes, what follows are janitors scooping up horse manure, along with individuals and groups hyping various political, religious and sundry causes. As reported in earlier articles at BigJournalism, this year's post-Rose Parade tag-alongs included a contingent of "Occupy The Rose Parade" malcontents with a hodgepodge of pathetic "floats", including a cheesy plastic bag "octopus of greed."


My video showing the Rose Parade crowd booing the "Occupy"ers has gone viral. I posted it to Breitbart.tv to show how the Occupods were bullying and harrassing regular people trying to leave after the prade had ended.

My sister-in-law took video from the stands at the beginning of the parade route. The crowd had not yet had a chance to disperse following the parade, so they booed the Occupy protesters. Further down the route, the crowd simply dispersed and ignored them.

My husband and daughter also attended the Rose Parade.  Afterward when they attempted to get to their car among the dispersing crowds on Colorado Boulevard, they encountered the oncoming Occupy "paraders". But rather than allow them and other spectators to walk freely, the Occupy mob literally attempted to shove my husband out of the way of their "parade".

When he didn't accommodate them, he and my daughter were verbally abused by the Occupiers who walked through them with their banners and silly plastic octopus. And while disgraced lawyer, convicted thief and failed political Democrat candidate claimed a loyal following of 5000, it was obvious that the Occupy mob numbered no more than one or two hundred, many of whom were probably dispersing parade spectators. 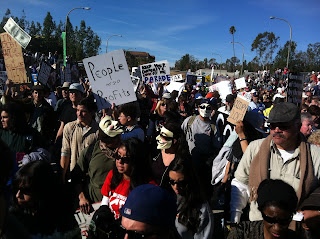 The Occupy organizer (supposedly trained in crowd safety) tried to shove my husband out of the way, but like a typical bully he stopped when warned against such behavior. Then my husband fumbled to begin taping in the middle of the event (thank Steve Jobs for such amateur video protection devices!). His portion of the amateur video starts inside the belly of the beast and is self-explanatory.  The Occupod was angry that someone had used citizen journalism to occupy his parade!

The shameless hypocrisy of the so called 99% is palpable: they believe that they are the only ones entitled on a public street and all others must make way for them. These are the same people who routinely blocked streets and intersections, disrupted businesses, took over public parks for months, raping and defecating along the way, preventing the free comings and goings of others. What their behavior demonstrates is the shear arrogance of the Occupy activism, their utter disdain for the law and the rights of others. It is they who are the one percent attempting to dominate with their fringe message of socialist control ably aided by the Make-Believe Media.
Posted by Susan Swift at 2:13 PM 1 comment: