Never underestimate the power of motherhood to change the world.

About a year ago, some high schoolers came up with a fresh, brash idea to promote their after school club’s simple pro-life message: "Life Is For Everyone."  These 14 to 16 year olds thought it would be great if they could organize a pro-life walk around Pasadena’s Rose Bowl. Their mothers agreed and together they acted to fulfill the goal. Walk4Life SoCal was born and began its mission to promote the first ever walk for life at Pasdena's Rose Bowl.

On Sunday March 27th, over 5,000 people registered to walk for the unborn, to send a positive message of life, to answer “yes” to the question of life in the womb.  They recruited nationally known pro-life champions Lila Rose, African-American preacher Walter Hoye, film producer Jason (“Bella”) Jones, and Hispanic actress Karyme Lozano as speakers.

The event’s lead speaker, Los Angeles’ Archbishop Jose Gomez, blessed the event, proclaiming “all life is sacred from conception to natural death. Let us ask our good God to bless us today and to be with us in all of our efforts to promote the culture of life."  The Archbishop echoed Pope John Paul II’s famous phrase “culture of life” in his remarks (not “culture of God” as was misreported).  I was in attendance that day.

The only paper to report the Walk for Life was the Pasadena Star News, a local paper owned by the Los Angeles Newspaper Group. Predictably, the reporter totally missed the monumental story: Twelve mothers with a combined total of 71 children (yeah, life math is impressive) did what professionals charge big bucks to do.  They organized and promoted a political march at the iconographic Rose Bowl, symbol of America college football competition and the envy of parade goers the world over. 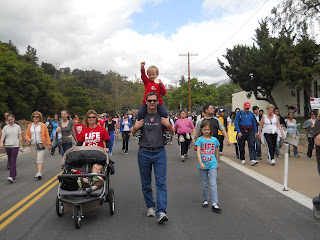 Just like the Tea Party, these conservative women used every form of social media plus old-fashioned grassroots spread-the-word skills they could muster. And they did it for love. Love of their children. Love of unborn children. Love of Life. Love for women who do not know the truth of abortion, its pain, its finality, its scars.

The media and the abortionists slept like the proverbial hare while Life walked steadily to Los Angeles, into the heart of Leftist La La Land and its film-making mecca. Perhaps the event passed beneath the abortionists’ radar this year. Perhaps Planned Parethood underestimated what a handful of mothers could do inside of a year. No death cultist sicko protestors picketed the Rose Bowl walk...this year.  That will certainly change.

Like the rebirth of the hero film genre, these conservative mothers have opened a new campaign, a real life “Battle LA” defending the sanctity of human life.   Their simple big tent motto, Life Is For Everyone, can make conservatives and Reagan democrats across Californians cheer and “re-up” if only someone has the guts to run a brave, pro-life campaign.

Perhaps conservative mothers will show the way in 2012.
Posted by Susan Swift at 10:53 PM