You can’t make this stuff up. The Rose Parade’s “Governor’s Award”-- for the float best depicting “life in California” -- could’ve been renamed the “Irony Award.” The winner, “Suenos de California” (Dreams of California) by the City of Sierra Madre, suffered an humiliating breakdown at the start of the parade and was unceremoniously towed the remainder of the course. What a perfect representation of once the Golden State’s current financial woes. California Dreamin’ it wasn’t. 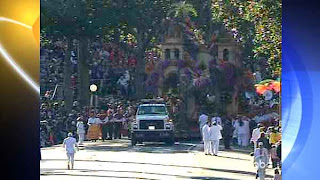 And until 2012, when the state’s gerry-mandered electoral districts get a Pelosi-style facelift, there’s little hope for a solution that can tow California’s broken down economy out of its Democrat Ditch.
Posted by Susan Swift at 8:22 AM